At times I am confused and just shake my head, thinking what just happened. Questioning… you want me to talk and know who I am but then criticized for voicing my opinion.

Yesterday was one of those days. Actually, the last week or two of situations and issues at hand.  As I spoke about some of these things to my counselor, you know sharing the ups and downs, the good and the bad and frustrations in life.  Let it out, vent and feel safe in her office space, which I did and do.

When I mentioned a couple of issues I had dealt with of what was recommended but not really necessary, my choice, I expressed that I was not going to do either.  I did not see the need and it is final.  It is okay to do that. Stating that and perhaps the frustration I felt while making my point and sharing with her, it was said by her that she sensed an attitude. I can see that but isn’t that part of all this, too, to work through?

An attitude?  Of course, being one that takes things to heart, that stuck with me.  Offended somewhat but also questioning if I was wrong for standing up for myself and in my decisions.  I have a right to speak up for me. While I knew she did not say that to be hurtful but it was her observation.

As a child and teenage years, I was silent.  When I became older, an adult, I felt more alive and was more vocal, which is needed with independence.  My confidence was better and finding who I was in life.  I was me.  A person that was more assured of herself and enjoying the new-found me, having a say and making my own decisions.  In knowing I was a Christian and trusted the Lord, I knew I was somebody also to Him.

While short-lived, not because of my faith in God but in people.  Family was the worst.  It was when I had to take control over my parents and make some decisions in healthcare, deaths, estates, etc., that I was ripped to spreads with words, opinions, lies and their attitudes.  Of course, they were right, I was wrong. Exhausting.  On top of all of that, too, my marriage took a hit.  Afraid to even ask, what else? Trust me, there was more.

During this time, I backed off and lost my desire to

vocalize much at all.  I was done.  I lost myself. Depressed. It was tending to my children, which was my main focus, our home to keep it standing and in repair and then my own health and well-being to stay alive.  There were times, I felt I would be better off dead, as it would have been the easy way out of my misery but I held on for my boys.

Later, I did attempt to care for myself more and while slow steps, I was still moving forward. So now, being in counseling the last five years and growing, healing and basically finding myself once again, I feel and know I still have a voice. Sometimes it is like, I remember her, and it feels so good, as she is still in there.  When my counselor said yesterday, I sense an attitude, I was taken aback.  Am I to speak up for myself or not?  Yes! Yes, I am.  Even though her words made me stop in my tracks, I am right to

have a say and I have a right to say NO. My boundaries.

I am not the same person that walked into my former counselor’s office five years ago, feeling crazy from life and struggling to live.  I am stronger today and I have fought to be here.  It feels pretty awesome, as I am moving forward.

While I want and we each need to speak up for ourselves, we can do that in a bold but pleasant way by not feeling and giving off the sense of we are all that and more.  I did have to question myself on that as I do not want to come off as arrogant.  I am just not going to sit back and not have a voice in what matters to me or for me.  I matter. You matter, too.

I know I will discuss just this attitude matter with my counselor next week but writing through it helps, too.  I can do that.

We all have issues we are working through in life, that’s just life. While we may exhibit a bad attitude at times, give yourself grace. Offer forgiveness, as needed, to others or even to yourself. 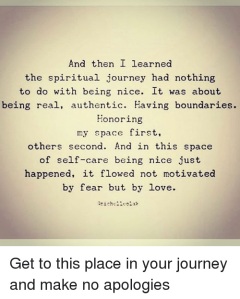